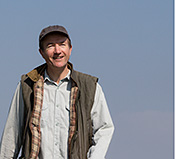 I was born in Cheshire but spent my early years in West Africa. My family returned to England in 1969 and settled in Hampshire shortly after.

I was interested in the natural world from an early age, and explored the local countryside around Winchester as I grew up. I took up photography when I left college and by 1990 I was concentrating on landscapes and nature. I went on to become the UK's Amateur Photographer of the Year before turning professional.

I have no photographic training – I’ve learnt all I know from my time in the field. The images on this site are some of my visual highlights of the British landscape and its natural history, portraying the detail and drama of a unique land.

I still take many of my photographs in the countryside around my home in Hampshire, where I live with my wife and son. My work has been widely published since 1990.

Medici Gallery, London, 2007
Receiving the award for 'Photographer of the Year' from the Royal Horticultural Society. 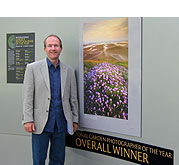 Royal Botanic Gardens, Kew, 2011
I was awarded the title 'International Garden Photographer of the Year' in 2011, for a collection of wildflower landscapes.

Two of the images were later exhibited in New York and Sydney as part of the international exhibition.